The innovative approach of PEGASUS (Promoting Effective Generation and Sustainable USes of electricity) is focused on experimenting a simulation of functioning of microgrids in 7 pilot areas jointly; solutions will be based on concrete situation with real data.

The UCY will test the functioning of a nanogrid (see definition below). The main goal is to model commercial and residential loads. Its smart meters will be able to measure consumption and generation parameters (such as active power, reactive power, voltage, current etc.) with high precision and accuracy. Through the nanogrid operation, FOSS research center aspires to provide a living-lab environment for the development, validation and qualification of innovative Smart Grid technologies and architectures.

The UCY’s nanogrid solution has been designed taking into consideration the special technical requirements and the purchase of equipment that is necessary for the implementation of the project’s goals. To facilitate minimum level of measuring and analysis capability, the following equipment/ apparatus, loads, sensors and central software management system will be installed through PEGASUS or other running projects within the university:

In the village of Saint-Quentin-en-Quint, power outages can occur after strong winds and threaten electricity supply for farmers’ cold stores or woodchip boilers. As a result, local representatives and inhabitants are searching for innovative solutions that can help the village to become independent regarding its energy supply thanks to local energy sources.

The Regional Energy and Environment Agency of Auvergne-Rhône-Alpes is studying a microgrid in a small rural village in the frame of the PEGASUS Interreg-MED project. In the village of Saint-Quentin-en-Quint, power outages can occur after strong winds and threaten electricity supply for farmers’ cold stores or woodchip boilers. As a result, local representatives and inhabitants are searching for innovative solutions that can help the village to become independent regarding its energy supply thanks to local energy sources.

The perimeter is delimited by all the 45 consumers connected to the main local power substation. They have already equipped 32 houses in the village with measurement devices. The remaining buildings are mainly unoccupied and it was not relevant to make measurements inside. There are 2 different types of measurement, depending on the preference of the owner and what is technically feasible. The measurement apparatus is either located on the electric internal board of the house or located on the meter. This second type allows for more detailed load curves. Where it was possible, controllable loads, such as electric water tanks, were registered. They also have an online visualization platform where they can monitor power and voltage every 10 minutes. They are trying to get measurements on the local substation as well. At the moment they are in the process of starting the modelisation of the grid.

The pilot is addressed to investigate a grid-connected community micro-grid model which represents small municipalities. Analysis and prediction of energy requirements would allow the micro-grid to be disconnected from the main grid (islanding) in case of main grid failure. Energy monitoring started in November 2017, with measurements being taken every minute.

The main objective of the Malta pilot is to simulate a micro-grid operation, including storage systems and different feed-in electricity tariffs. The micro-grid model also aims to reduce the costs of energy for the micro-grid community members, to provide a more reliable energy supply by using renewable sources (possibly in conjunction with energy storage) and to reduce losses in upstream distribution network.

In the Sport Park Ruse in Slovenia, the pilot site is based in a sports resort and includes two existing PV plants of 50 kWp each. A group of 4 buildings was selected that would represent the loads of a micro-grid with about 500 MWh/year total electricity consumption. A system was established for continuous monitoring of the generated electricity by PV plants and the consumed electricity supplied by PV plants and public grid.. The measures are taken every 15 minutes. With the measurements we will develop the consumers and production profiles and model the needs for potential electricity storage. On the basis of these measurements, technical and financial models will be prepared which will help to simulate the operation of microgrids under different conditions.

The pilot is aimed to demonstrate the economic and environmental advantages for users and producers through an energy efficient microgrid which would help to make the best use of the existing resources, eventually using storage systems, and would provide cheaper electricity to end-users while ensuring at the same time a good remuneration to the PV generators.

The pilot can be a showcase for other public facilities. 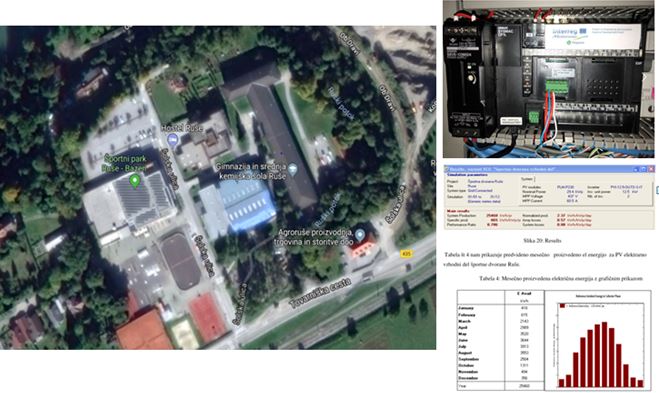 The Potenza pilot involves Santa Lucia escalator, the most powerful and long escalator in the city and the swimming pool of Montereale Sport Park.

The Potenza pilot site aimed at demonstrating the achievable advantages (primary energy, peak shaving, reduction of energy bills) by the Municipality in two different sites: a swimming pool, where a 165 kW CHP is able to provide about 95 % and 85 % of the required thermal energy and electricity, respectively, and also to feed, through the existing distribution network, about 70 % of the electricity consumed by an electric escalator, having an installed power of 192 kW, used to transport people from the outskirts to the city centre.

The existing boilers in Montereale swimming pool will be partially substituted by a Combined Heat and Power system (CHP) driven by the heat demand of the swimming pool. The related generated electricity is used to meet the electric demand of Montereale swimming pool; the surplus is fed into the local distribution network in order to be used  by  Santa Lucia escalator, by virtue of the regulatory solution called ”Scambio Altrove”.

The assessment of the monitoring carried out on the acquired data in the period from November 2017 until May 2018 identifies in a CHP system, 120 kW in thermal power and 65 kW in electric power, the most profitable solution. In addition to the intrinsic energy benefits of the CHP system it has been evaluated 25 MWh/year of reduced losses on the electrical network related to the pilot.

The Greek pilot site is located in the Municipality of Farsala in the area of Mega Evydrio (Thessaly Region), and consists of public, commercial and private buildings and facilities.

In the area there are also 5 electricity producers (PV parks) with total installed capacity of 500 kWp (5*100).

The model that is being studied is the one of an “Energy Community” (local consumers & prosumers consortium), with one point of common coupling (PCC) with the distribution network.

The main objective of the Greek pilot is to simulate a micro-grid operation, including storage systems and flexible electricity tariffs. The Greek pilot is going to be connected to the public grid, but it will be able also to operate in ‘island’ condition. The energy consumption monitoring started in March 2018, with measurements being taken every minute.

Municipality of Preko is small island community situated on Preko Island. In 2015 municipality adopted Strategy of Sustainable Development where it is stated that one of the goals is long term energy efficiency and promotion of renewable energy. Preko pilot consists of microgrid using PV as RES, installed on olive oil mill building acting as RES (Prosumer) and „Pučko otvoreno učilište“ building that is acting as Consumer.

10 kW PV installation on the roof top of olive oil mill, serves as RES source in Preko microgrid project. PV provides majority of electricity needed for neighbouring building of „Pučko otvoreno učilište. Currently both buildings are connected to the electrical grid and are owned by Municipality of Preko.

Olive oil mill building was built in the 60ties. Currently is being used as olive oil mill and has an average 300 kWh monthly el. energy consumption. It is important to mention significant peak that occurs in the season of olive oil production; when mill operates 24 hours, but only for couple of days, as current olive oil production on Preko is only 20 % of total capacity.

The building „Pučko otvoreno učilište“ was built in 1960 with total net area of 385,23 m2. Currently is occupied with 4 different users; 3 public and 1 private.  Each of the users has its own consumption meter installed. One office is used by „Pučko veleučilište“, second is Tourist board, third user is multimedia hall which is used for various local events and fourth is privately owned cafe bar. The building is connected to the local grid. As heating source during winter air conditioning units are used thus contributing to overall el. energy consumption. Average annual el. energy consumption is 12.145,00 kWh with annual cost of 1.671,33 EUR, corresponding to annual CO2 emission from el. consumption of 2.8 t of CO2 per year.

Currently Preko pilot is in finalising testing – metering devices were installed in November 2017 and metering started in late December 2017. Preko added microgrid also as a part of SECAP.